Our heroes are in biiig trouble, having walked right into a group of Red Brand bandits hanging out near the Sleeping Giant Inn that the group was warned to stay away from. With Xavros and Dweezil at only 1HP, fighting their way out of this mess is not wise. The bandit leader demands that the heroes empty their pockets. Celkini notes that she doesn't have anything in her pockets, really, because Xavros is holding all the gold they just got and they haven't been back to the cave in the north to get all the stuff that the goblins and the bugbear stole. Fortunately, she doesn't divulge that they have a treasure chest back at the inn, but Xavros and Dweezil can't breathe a sigh of relief just yet. The bandit leader, unable to get a word in as Celkini babbles on, decides instead to draw his sword. His fellow bandits follow suit. Xavros attempts to distract them with inappropriate mom comments via Vicious Mockery, but his shitty roll didn't do enough damage to do more than piss them off. Our intrepid heroes are in big trouble.

Out of the blue, the wayward monk, Asher, comes running in to save the day. He stuns the leader threatening Celkini. One of the other bandits attacks Asher in return, but Asher is so badass after his communion with nature, that he simply blows on the sword and it misses him. Dweezil (played tonight by DnD newbie, PhantomFoxx, in the absence of Deacon) actually has Cure Wounds this time and uses it to cure himself. Another bandit tries for Asher again but fails. It's like Asher is  Bruce Leroy.

Celkini and Ben immediately jump into action. Ben leaps onto the prone leader and bites him on the neck, tearing out a rat-sized hole in his throat, leaving him to bleed out. Celkini leaps onto Asher, springboarding off of the monk's back, to shoot Hail of Thorns with her darts. 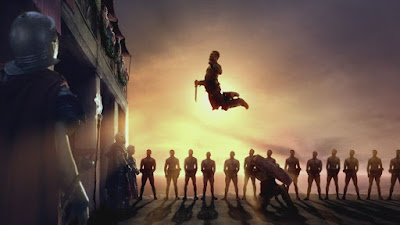 Asher gets hit as well, but he's feeling no pain. She severely damages the big guy, but he's still standing, so while still in the air, she tosses away her blowgun like Bautista and switches to her hammers. Fueled by adrenaline and her growing bloodlust, she finishes the job.
Xavros and Dweezil quietly back away, curing themselves as they go, and cheering on the team. Celkini and Asher nod to each other and together, they take out the final bandit. When the dust settles, the heroes discover that they have an audience who soon bursts into cheers. This is new to Xavros, who looks down and realizes that Carp is still holding on to him and may or may not have peed a little. Carp is so happy that he's a hero too, but then notices the carnage and turns pale. Xavros turns him away while Asher searches the dead bandits' pockets. There is a disappointing lack of broken lockpicks. They have nothing but shortswords, one of which Asher keeps, and another is given to Carp as a gift for his bravery.

But Celkini is still on fire and runs off in the direction the last bandit had attempted to run off to. She finds a ruined manor. Asher catches up and tries to calm her down. They spy a patch of ground that is clear of grass. There's a gleam of something shiny that Asher sees. It's enough to get Celkini to focus. Xavros and Asher grudgingly join them as Asher investigates the shiny thing and finds a handle. Using his strength, boosted by Xavros' Bardic Inspiration, Asher pulls up the trap door and manages to get it open. He sees a narrow set of steps in the darkness and a large iron door below, with light apparent coming from behind it. Dweezil and Xavros think this is a bad idea, Celkini is still quite hyper and would have dashed down the stairs had Asher not been holding her. Asher decides for them, leading the way down and opening the door. 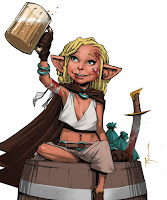 Inside they find a ledge, and below, a cavern full of kegs and stuff. Ben nips Celkini on the finger, which finally serves to calm her down. Asher uses his ki to give everyone a bonus to stealth, preventing them from being tracked. There are rations in some of the kegs, and ale in others, which Celkini discovers, to the further detriment of the group.

While the others hide, Asher finds three bandits sleeping or reading in one room. Across the way through another door, he finds a hallway.


They decide to take out the three people in the room. Dweezil charms the armed guard, while Asher and Celkini take out the sleeping bandits. The charmed bandit is pleased to meet the new recruits, but wonders where their red cloaks are and why they have even been recruited since they aren't human males. They also learn about furry dudes, secret doors, and a cyclops that the bandits feed prisoners to. After some really bad persuasion, they decide to kill him and take the cloaks.

DnD: Prince Will Remember That

After sorting through our well earned experience points after the harrowing defeat of a bugbear and escape from the goblin cave, the intrepid heroes end up at the home of the trader, Elmar. The streets are empty and the night is dark, but Celkini and Dweezil beat down the door and a groggy Xavros offers tiefling threats until Elmar opens the door and lets them in.

Celkini heals the wounded Sildar enough for him to stand up for the heroes when Elmar refuses to hand over their gold. After some argument and an appearance from Ben that causes Elmar to demand they leave. They finally agree to return in the morning. They head back to the inn with Sildar, who treats them to a meal and individual lodgings before going upstairs to bed. They drag the chest upstairs and agree to leave it in Asher's room. Ben and Dweezil agree that Ben will return to Elmar's house to keep an eye on things.

Feeling lonely without Ben, Celkini toddles over to Xavros' room with her blanket and pillow and asks if she can stay with him.

He's hesitant at first, but agrees to let her sleep in his bed. He mistakenly asks about why she is there, and she begins a long story about her first defeat of a bugbear, but fortunately, soon falls asleep, but continues the moment she wakes up in the morning. He sends her downstairs where she meets Sildar and has a bite to eat. Celkini orders pancakes. 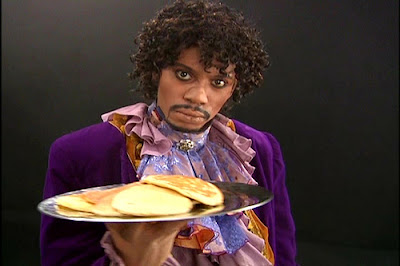 Upstairs, Dweezil and Xavros discuss the need to pick up their gold and report to the mayor. Together they head downstairs. Celkini goes upstairs to find Asher, but the bed is empty. The chest is still there.

Back downstairs, Sildar informs them that he is a member of the Lord's Alliance and had come with Gundrin Rockseeker who is still missing with all the maps. He also explains some dwarven history stuff that Dweezil understands. A mission is afoot, but our heroes need time to recuperate, gather their gold and information, and do some research.

Back at Elmar's, Dweezil shops for glow sticks, Xavros counts the gold, and Celkini eyes all the shiny things.

Business concluded, they head to the mayor's house and ask about the red caped bandits troubling the area. The mayor claims no knowledge of this, but Dweezil's sharp investigative skills prove otherwise. Outside, the posse decide to hire a young spy to keep an eye on the mayor while they continue their business. They unwisely send Celkini off to find the right person: a young halfling that wants desperately to be a hero, but gets easily caught up in games like hide and seek. Xavros plays along and suggest they switch to follow the leader to discover where the red capes are hiding. This probably was not a good idea with Asher missing and Xavros and Dweezil both at only 1HP.